Wireless Backhaul Used All Over SXSW 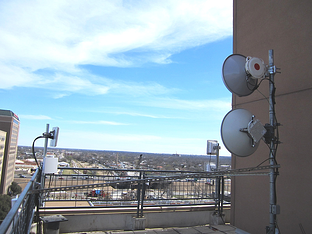 At the SXSW 2013 (South by Southwest) Film and Music Festival tens of thousands of people from around the world swarm to Austin, TX to experience the latest in film, technology, gaming, and see the over 2000 bands that playing live at over 200 venues. The SXSW event merges film, music, and technology all in one place. Technology and social media are playing an even larger role at SXSW. Major technology, social media, and corporate giants like, Dell, Samsung, Google, Microsoft, AT&T, Yahoo, and others all have a presence and host amazing parties and events at SXSW.

In years past, one of the biggest complaints was the lack of broadband connectivity, that's if you could get connected at all. With so many people in such a concentrated area many of the cellular networks get overloaded and come to a crawl. Add to the fact that there is now a 2 to 1 ratio of Wi-Fi enabled devices to people. Laptops, iPhones, iPads, and all the other smartphone devices were present everywhere. This year SXSW wants to make sure that they can enhance the attendees experience by bringing wireless bandwidth to the people. Plus all the major event hosts are using a large amount of wireless bandwidth for production and exhibit displays.

In order to pull off having so much wireless frequency all over town coming from the wireless repeater site, multiple radio frequencies are used during the wireless network design and wireless installation. One of the largest challenges is the fact that during SXSW there is a lot of wireless interference caused by so many people deploying outdoor wireless, to include outdoor Wi-Fi.  Plus, since SXSW is a temporary event, the use of licensed microwave is not feasible and unlicensed wireless has to be used. Frequencies ranging from millimeter-wave (60GHz), unlicensed 24GHz point to point microwave, and unlicensed 5.3GHz and 5.8GHz wireless radios are used.

For the Wi-Fi at some of the events, wireless Wi-Fi arrays are used to deploy high density wireless communications (see “AO Wireless Deploys Xirrus Arrays at SXSW for High-Density Wireless”). SXSW doesn’t provide Wi-Fi at all the events but at some of the major ones they do in order to make sure the end user experience is enhanced. There is just too many venues to put Wi-Fi at all of them.

By using wireless backhaul, both point to point wireless bridges and point to multipoint wireless Ethernet bridges, wireless connectivity is deployed to venues and events that can be in buildings or out in the middle of a field or parking lot. Broadband is made available for production, point of sale systems, ticketing systems, exhibit interaction, and most of all an enhanced attendee experience.

Wireless backhaul used for the core network distribution and last mile wireless used to provide bandwidth to special event venues gives SXSW a lot of flexibility and the ability to provide Wi-Fi to attendees. Once the event is over the equipment will be removed as if it was never there.