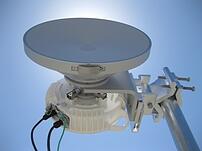 Most common unlicensed wireless bridges operate in the 900MHz, 2.4GHz, 5.3GHz, 5.4GHz, and 5.8GHz frequency bands. Unlicensed wireless backhaul is susceptible to wireless interference. See article "Wireless Interference - The Effect on Unlicensed Wireless Backhaul." There is also millimeter wave 60GHz band used for gigabit wireless backhaul that is unlicensed. Licensed microwave links typically operate in 6GHz, 11GHz, 18GHz, and 23GHz. See article "Licensed Microwave Wireless Backhaul." There are a few bands like 4.9GHz public safety band and the 80GHz E-Band that are registered with the FCC but are not truly licensed.

Then there is a part of the spectrum that is mostly overlooked and forgotten about. 24GHz is an unlicensed frequency that can be used for microwave communication for point to point wireless backhaul. For a wireless Ethernet bridge, 24GHz offers some great advantages. Because of the ERIP 24GHz is identical to 23GHz band and can be used for shorter range wireless links (typically under 2 miles) but it has tremendous advantages. First it's rarely used so there is virtually little to no wireless interference. Manufactures that make 24GHz microwave communication radios are those that manufacture 23GHz licensed microwave links and use the same carrier grade microwave radio platform adjusted to operate at 24GHz. As a microwave backhaul link systems can do up to 366Mbps full duplex using 256QAM at 56MHz wide channels. That's 720Mbps aggregate throughput!

If you need a point to point wireless backhaul that can provide 99.999% reliability, need full duplex connectivity, and are worried about wireless interference then take a look at 24GHz!