Alpha Omega Wireless, Inc. ("AO Wireless") has recently brought into its team Jared Wasowicz as its new Central Region Sales Manager. Jared comes to AO Wireless with a diverse background in wireless technology. Jared's skillset in the wireless industry comes from working with a large internet service provider (WISP) for over 6 years where he worked on solutions for the enterprise and events space. Jared also has an accomplished career in IT services dating back to his role as an IT Director of a midsize company. This allows Jared to understand both the integrator side as well as the client's needs. Jared is passionate about placing the customer first, while ensuring a memorable experience in every stage of the project.

Jared's role is to make sure that our client partners get the best possible wireless solutions, whether a point to point wireless backhaul link (either a licensed microwave or unlicensed Wireless Ethernet bridge), a point to multipoint WiMax / Mesh, or a high density Wi-Fi network meet the highest predictable reliability and performance.

President Joe Wargo says, "We are excited to have Jared on board. Our biggest need in our growth strategy is just letting potential client s know we exist so we need more of a sales presence across the nation. We already can deliver the best wireless solution captured to any other Wireless Integrator. We just need to have more representation for our potential clients. Jared has one of the best work ethics we have found and we know he represents the core values of AO Wireless.

As Alpha Omega Wireless continues to grow we need to make sure we have the right people on board and that we have them in the right position. Too often companies don’t invest into its leadership. Jared will be a huge asset in making sure, as we grow, we grow properly.

Alpha Omega Wireless, Inc. ("AO Wireless") has recently been added to the Texas State DIR contract. AO Wireless is now listed under the DIR Contract (DIR-TS0-4021) providing a complete range of wireless networking products and solutions. Agencies that utilize the DIR Contract system for the procurement can now partner with Alpha Omega Wireless, Inc. for all their wireless networking needs and solutions. 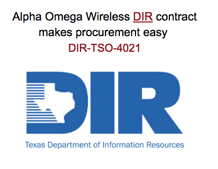 President Joe Wargo says, "We are excited to have our wireless solutions and offering on the DIR Contract. Alpha Omega Wireless works a lot with government (City, County, and State), along with Education and Utility organizations. Having a qualified procurement vehicle makes it more effecient for our clients to get the products and services they need. Now we'll be able to provide more value to our clients while saving them time and money.

About DIR
The Department of Information Resources (DIR) provides statewide leadership and oversight for management of government information and communications technology.

DIR has served in a leadership role to facilitate the state’s economic competitiveness through its ability to deliver quality information resources commodities and services at the lowest prices and best value for state and local government as well as the K–12 public and higher education systems. 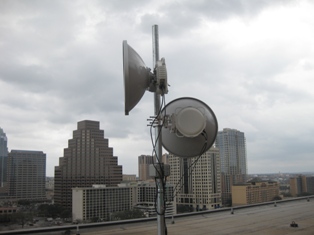 President Joe Wargo says, "The 24GHz wireless spectrum band is an unlicensed frequency that is heavily underutilized in the United States. Like licensed microwave, a point to point wireless Ethernet bridge in the 24GHz unlicensed wireless band provides carrier grade wireless backhaul. The 24GHz wireless backhaul is ideal for point to point wireless bridges up to 2+ miles. With the SAF Tehnika CFIP Lumnia we can provide carrier / enterprise grade connectivity up to 366Mbps Full Duplex (732Mbps aggregate throughput) in areas where there is a lot of wireless interference. SAF provides the best in breed quality radio systems. When dealing with such a mission critical network we trust only the best microwave radio products available.

The company provides an important part of the telecommunications infrastructure to customers in 97 countries worldwide.SAF Tehnika has grown to be an acknowledged member of the industry. The company's determined focus, strong technology resources and quality products allow it to compete successfully in its market segment with the largest integrated vendors - Ericsson, Nokia Siemens Networks and NEC.

Alpha Omega Wireless, Inc. will be exhibiting at the 2012 SXSW Interactive Festival.

President Joe Wargo says, "We are extremely excited to be able to participate in one of the most exciting events in the world. SXSW brings together music, video, and emerging technologies all in one place. The one thing all entertainment and media have in common is the need for greater bandwidth. Wireless technologies play a key role in the creation and distribution of both music and video. People now demand the ability to get a rich media experience one their PC's, tablets, and smart phones. We are seeing an explosion of how content is delivered.

Wireless broadband and wireless backhaul growth is being demanded. As a wireless integrator, we are proud to demonstrate at the event what technologies are being used to help build out America's broadband network."

About SXSW (South by Southwest)
SXSW Music is one of the largest music festivals in the United States, with more than 2,000 performers playing in more than 90 venues around downtown Austin over two weeks, in March. The SXSW Conferences & Festivals offers the unique convergence of original music, independent films, and emerging technologies. SXSW Film has become one of the world's premier film festivals,focusing on new directing talent.

Similarly, SXSW Interactive has attracted a strong following among web creators and entrepreneurs. Its focus on emerging technology has earned the festival a reputation as a breeding ground for new ideas and creative technologies. According to festival co-organizer Louis Black, SXSW Interactive "has probably been the biggest of its kind in the world" since 2007.

Alpha Omega Wireless, Inc., headquartered in Austin Texas, was hired for the second year in a row by SXSW to provide wireless Ethernet backhaul and outdoor Wi-Fi to multiple venues around Austin for the 26th Annual SXSW Film, Interactive, and Music Festival. 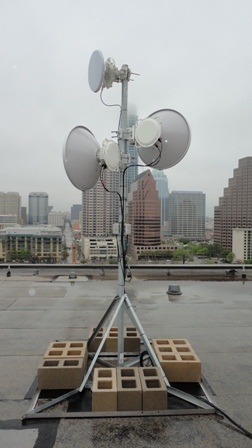 President Joe Wargo says, "We were excited to be asked by SXSW to return to help them provide critical bandwidth to their major venues and some outdoor Wi-Fi at select special events. SXSW really goes out of their way to make the entire SXSW Festival an amazing event for all who attend. Over the years they have seen a huge increase in demand for internet bandwidth by its participants. Most everyone is carrying an IP enabled wireless device. SXSW just couldn't rely on the carriers to provide the bandwidth that's being demanded.

We were able to deploy carrier grade, full duplex, point to point microwave links to several large venues allowing SXSW to provide bandwidth where they needed it most. For this project we used a combination of high capacity radio systems like SAF 24GHz Lumina radios and 70GHz Siklu radios. The advantage of these wireless frequency platforms was to help avoid interference. Plus they could be deployed immediately under FCC regulations.

This year we also expanded multiple point to multipoint wireless backhaul to concert venues and outdoor event locations. Other major accomplishments this year was providing high speed Wi-Fi, to some high profile, outdoor party events and outdoor meeting events. For the outdoor Wi-Fi applications we used Xirrus Wi-Fi array systems in order to handle the high density of Wi-Fi users and devices.

About SXSW (South by Southwest)
SXSW Music is one of the largest music festivals in the United States, with more than 2,000 performers playing in more than 90 venues around downtown Austin over two weeks, in March. The SXSW Conferences & Festivals offers the unique convergence of original music, independent films, and emerging technologies. SXSW Film has become one of the world's premier film festivals,focusing on new directing talent.

Similarly, SXSW Interactive has attracted a strong following among web creators and entrepreneurs. Its focus on emerging technology has earned the festival a reputation as a breeding ground for new ideas and creative technologies. According to festival co-organizer Louis Black, SXSW Interactive "has probably been the biggest of its kind in the world" since 2007.