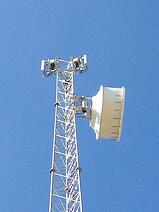 LTE as a technology is primarily for the mobile providers and operates in licensed 700/800 MHz and 1700/1900 MHz in the United States. Other frequencies can be used internationally. LTE is typically not a wireless communication solution for enterprise and commercial end users. Other technologies, such as WiMax, point to point wireless, and point to multipoint wireless Ethernet bridges are readily available to non-mobile operates for their wireless communication needs. Although, there has been an increased opportunity for LTE for other non-mobile applications such as, Smart Grid and SCADA applications for water, gas, and electrical utilities. In this case LTE is used for both mobility and fixed wireless applications.

Because of the ability to use lower frequency bands LTE offers great coverage areas. It also protects an organzations investment by allowing for future upgrades and changes. WiMax also offeres similar coverage capability and wireless backhaul bandwidth. Both technologies offer great solutions for wireless backhaul for both mobile and fixed wireless communication applications. Even though it is truly a wireless communication standard derived for use by mobile phone porivders, other applications needing wireless broadband connectivity can benifit for the emerging tehnology.