Wireless Backhaul is a Winner in Natural Disasters

As a Wireless Integrator, that has deployed thousands of wireless Ethernet bridges, I am a firm believer that wireless technology for broadband backhaul not only provides a phenomenal value but in many cases is a better technology for broadband backhaul than traditional fiber / copper infrastructure. Wireless backhaul, whether we are talking about point to point wireless backhaul, using licensed microwave or an unlicensed wireless Ethernet bridge, point to multipoint wireless Ethernet backhaul (using 5GHz unlicensed wireless band or WiMax), or wireless mesh,  can provide greater reliability, last mile presence, quicker deployments, and is far cheaper than hard line infrastructure.

You can say, “Well you do wireless backhaul for a living so you are biased.” Let me tell you about a recent trip I took to a third world country and experienced a natural disaster. Recently I was on the island of Roatan in Honduras while a hurricane passed over the island. We experience sustained winds of 70+mph (with gusts of 100mph) and about 4 inches of rain. During the storm I was uploading photos to Facebook because I had a fast, uninterrupted full 3G cellular services without any outage or latency. 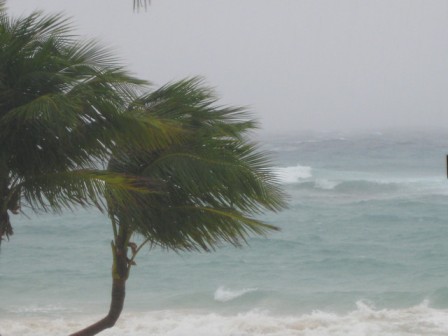 Remember Katrina? Well most of all the fiber networks in New Orleans were wiped out and untill today it hasn't been all fully replaced. Immediately after the hurricain there wireless networks were installed all over to provide voice and data connectivity.

All throughout the Caribbean and Central America most countries have leapfrogged the USA in the use of wireless backhaul for telecommunications and broadband services. A lot of countries can’t run fiber due to terrain (jungles, mountains, waterways, and a lack of infrastructure) and the pure inability to afford a fiber build out. Wireless though is everywhere. You can be in the jungles of Belize and have a solid 3G connection.

In order to get broadband connectivity and voice service many of the Caribbean islands depend on point to point microwave connectivity. Then cellular and point to multipoint wireless is used to distribute wireless broadband around the island. One would wonder how well the service coverage would be and the quality of the wireless installation would be in a third world country. After seeing first hand during a hurricane I would say it’s pretty good! Back home in the USA where I am served by a local cable provider my internet connection gets knocked out all the time when we have a storm of 30 to 40MPH winds

Wireless backhaul is far easier and cheaper to deploy than fiber. Broadband wireless networks also allow for a lot of flexibility in access to a POP (point of presence) and network design. The greatest concern most people have with using wireless backhaul is if it’s reliable. From what I experienced I would say it’s extremely reliable. Understand that microwave radio equipment uses extremely little power. In most cases a microwave radio can be powered on a battery or over solar. Most outdoor radio units use -48vDC at 30W. A standard UPS can keep a wireless end node powered for hours. If installed properly a wireless network can provide 99.999% reliability. See my previous articles: “Does Weather Effect Wireless? The 5 Misconceptions - Part 1” and “Is Wireless Reliable? - The 5 Misconceptions - Part 2.”

Like I always say, if wireless backhaul is properly engineered and the wireless installation is done properly it is extremely reliable!