The most common wireless backhaul, known as a wireless Ethernet bridge, operate in the unlicensed wireless (license-exempt) 900MHz (902-928), 2.4GHz, 5.3GHz, 5.4GHz, 5.8GHz frequencies of the RF spectrum and are exempt from FCC licensing requirements. There are also 24GHz, and 60GHz wireless bridge point to point links that are considered unlicensed wireless, but are typically immune to interference. This means the system operator does not have to apply for and purchase a fixed microwave communication link license from the FCC. These systems, although quick to deploy, do not promise exclusive use of the band and are susceptible to potential interference.

Recently we had a client that was operating two wireless backhaul networks for roughly four years using two sets of Motorola PTP600 unlicensed wireless Ethernet bridges. When they were originally installed they were getting almost 300Mbps aggregate throughput (this is like having 150Mbps full duplex throughput). Over the years the wireless bridges started to get hit with interference. The PTP600 wireless backhaul radios do channel hop to try and operate on a cleaner frequency channel when they receive high levels of wireless interference. They also can down step their modulation to create a better RF communication, which also lowers the radios wireless throughput capacity. They ended up struggling with only about 30Mbps aggregate throughput due to the amount of wireless interference they were being hit with. 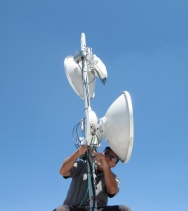 We ended up replacing the Motorola PTP600 unlicensed 5.8GHz wireless Ethernet bridges with SAF Tehnika CFIP Lumina licensed point to point microwave links. The new wireless bridges operate in the licensed 18GHz frequency. The SAF Lumina licensed microwave links are now providing the client with 366Mbps Full Duplex (over 720Mbps aggregate) throughput. Because the SAF Lumina are licensed wireless and the frequencies are now owned by the client they are operating interference free. We were also able to downsize the antenna sizes to smaller parabolic dishes.

If you have good LOS and want true fiber replacement on a primary network connectivity path licensed microwave links should be considered over unlicensed wireless bridges.