Outdoor Wireless Bridges or Fiber, Which Do You Trust

An experienced IT Director once told me, "The question is not if your fiber backhaul will go down, but when will it go down." This was on a day where he experienced his fiber being cut due to some construction workers trenching up the conduit that his fiber was in during a road repair project. This happens more often than you think. Why do you think most SLA'a by a telecommunications companies are only 99.9% uptime.

Ever question how long it takes for a telecommunications company to do a truck roll to repair a cut fiber? If it's a clean break fiber can sometimes be fusion spliced back together. In most cases where a fiber pole goes down or gets ripped out by a backhoe, the fiber gets stretch and has to be replace but cutting it at two ends and a new piece fusion spliced back in. This can take hours if not days to accomplish. What would be the cost to your business if that occurred?

This picture shows a local telecommunications companies main fiber line providing the main backhaul for a city government laying on the ground after a pole fell over. It has been like this for weeks. 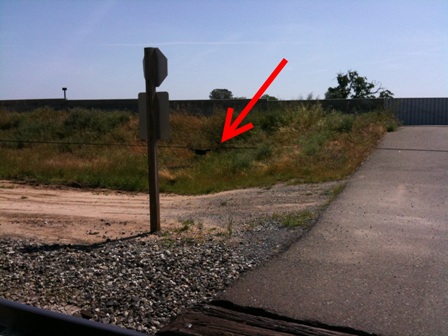 Most people don't think about the fiber once it leaves their building or know the path it takes. Most long haul fiber in established urban areas runs inside sewer lines. In rural areas fiber mostly runs along telephone poles. Ever drive down a road and see a bunch of wood telephone poles leaning from side to side? Well that might just be the fiber your network is running on.

Microwave communication can be in the form of a point to point wireless backhaul, a point to multipoint wireless bridge system, or a mesh wireless Ethernet bridge. If a microwave radio fails it can be swapped out in the matter of minutes (provided a spare is maintained). After an earthquake or other natural disaster, a wireless system can be realigned immediately getting communications back up and running. Wireless backhaul was used after Hurricane Katrina for months before the telecommunication companies could get their fiber repaired. The biggest concern with wireless backhaul is the potential for wireless interference. Using a licensed microwave link can solve any interference concerns.

Customers that have experienced a good wireless installation typically use their point to point wireless backhaul as their primary connection and downgrade their leased telco circuit (saving them reoccurring costs) as a secondary. A wireless link also puts control back into the hands of the owner rather than relying on a telco. You can't fixed a down telephone pole because a tree branch fell on it, but you can swap out a wireless Ethernet bridge radio easily.