Wireless as a Green Technology? Actually it is based on power consumption and impact on the environment. Green technologies are the talk of the town as the world community tries to preserve our planet's natural resources by turning to cheaper and more efficient energy sources. Data and telecommunications are one of the fastest growing industries worldwide. How often do people think about the environmental impact of the broadband infrastructure rapidly being deployed?

For years the USA has relied on fiber infrastructure to provide its broadband backhaul. Fiber deployments require installing fiber cable either by aerial means (strung from pole to pole along a particular route) or by trenching the ground to put fiber in underground conduits. Both impact the environment. Aerial fiber requires a lot of PVC and rubber based jacketing to protect the fiber. These materials are not good for the environment. Aerial fiber also requires poles, either metal or wood, to be placed every 100ft or so. Underground fiber is put into conduits which eventual have a soil impact. Plus the trenching of natural land impacts nature. One must also take into account CO2 emissions that are produced in the construction and deployment of fiber. 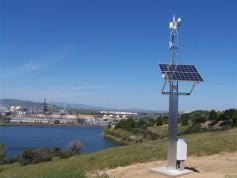 Take for example a solar powered repeater site used for a client's video backhaul. On a hill above a reservoir, where there was no local power available, two solar panels provide enough energy to power a point to multipoint wireless system that backhauls multiple PTZ IP cameras located a mile away and a point to point wireless Ethernet bridge to a remote facility 4 miles away. The outdoor wireless system is powered by recyclable batteries that are charges during the day by the solar panels. The systems provides up to 5 days of survivability in the event of the solar system failing.

Installing a solar powered wireless backhaul system is relatively inexpensive, compared to running AC circuits. A quick ROI can be achieved from the savings of equipment shelter leasing costs and monthly power costs. Plus you'll be doing your part to help the environment!