After a decade of designing, selling, and installing outdoor wireless backhaul systems I consistently come across five reoccurring questions that all clients ask and their misconceptions. Each week I'll present one of the five questions and answer them in plain English and put the misconceptions rest.

Well the answer is Yes & No!
Technically "Yes" - different forms of weather do have effects on various frequencies. Reality "No" - if the right frequency and antenna system is properly engineered, designed, and installed a wireless backhaul system can provide 99.999% reliability.

The obvious one is wind. Wind in itself doesn't effect the RF signal but it does put an external force (wind loading) on the antenna system that can cause it to move or come out of alignment. This is pretty easy to understand. The clear answer is to properly install antenna systems to withstand local wind patterns. Most antenna systems are designed to withstand wind gusts up to 110mph (varies by manufacture).

The main question arises with precipitation (e.g. fog, rain, and snow). All wireless signals that travel from one antenna system to another experiences some form of "Path Loss". Properly designed systems use the correct antennas, frequencies, and transmit power ("Tx") to overcome the Path Loss to get the desired Receive Signal Level ("RSL" measured in dBm). Radios are designed to operate with a certain level of "Fade Margin" that allows the system to operate at a predictable reliability (for most systems 20 to 25dB of Fade Margin is recommended). This means if a system has an RSL of -50dBm and it has a receiver threshold of -72dBm, you'll have 22dB of Fade Margin or the amount of dB signal strength a system can loose before you will experience errors or loss of connectivity. 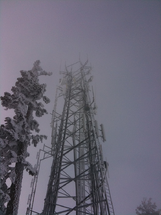 Moisture such as fog, rain, and snow (depending on its water content) adds attenuation to the signal's path. The amount of moisture is critical to understand here. Fog, although dense, has very low moisture when it comes to its effect on RF signal. With snow it all depends on its density. Snow typically has less moisture content than actual rain. Rain depends on the amount of rainfall (measured in mm/h) and the size of the raindrops. Heavier the raindrops and the higher velocity of rainfall the higher the attenuation. Typical rainfall produces roughly 5.5dB. Again it depends on the amount of rain coming down and the frequency being used.

So, if a system is designed and installed properly, a wireless backhaul system can still produce 99.999% (<5min predictable yearly outage) reliability. Note: amazingly good since most telco's only guarantee 99.9% reliability on their fiber infrastructure).